Even if you don't live in the Netherlands, it won't take long until you notice, when you visit the country, that the main vehicle used by its citizens is something much more than just a means of transport to go from A to B: it's a lifestyle, something so personal that ends up becoming a companion for life. It's part of what being Dutch means. It also tells you a lot about how Dutch people see and approach life - freely and in the most practical way.

The Dutch are practical (or should I say pragmatic?), don't make a fuss about things, are not afraid of getting straight to the point and know when to say no. They also love cultivating good, balanced health with well-being and quality of life. In my opinion, these are essential features of a mind-set that perfectly connects with a "two-wheels character".

Going to work in Rotterdam, strolling around the parks and streets, taking their kids to school in Maastricht, shopping and going out at night, visiting friends in The Hague or delivering cheese in Gouda: the whole journey of peoples' lives are mainly done by bike. I can't forget the mesmerizing reaction I had when I heard my Dutch teacher saying that some women go to hospital by bike right before giving birth! Honestly, I wouldn't be surprised if I happen to see this picturesque scene someday. After all, these are habits that go hand in hand with the spirit of freedom which, as I said, they appreciate so much.

Not to mention the advantages of being spared from awful and stressful traffic jams. Endless lines of cars, excessive noise and the mad atmosphere that prevail on busy streets are something that has never been seen in the Netherlands. Would you believe it but there are four times more bicycles than cars in the country! 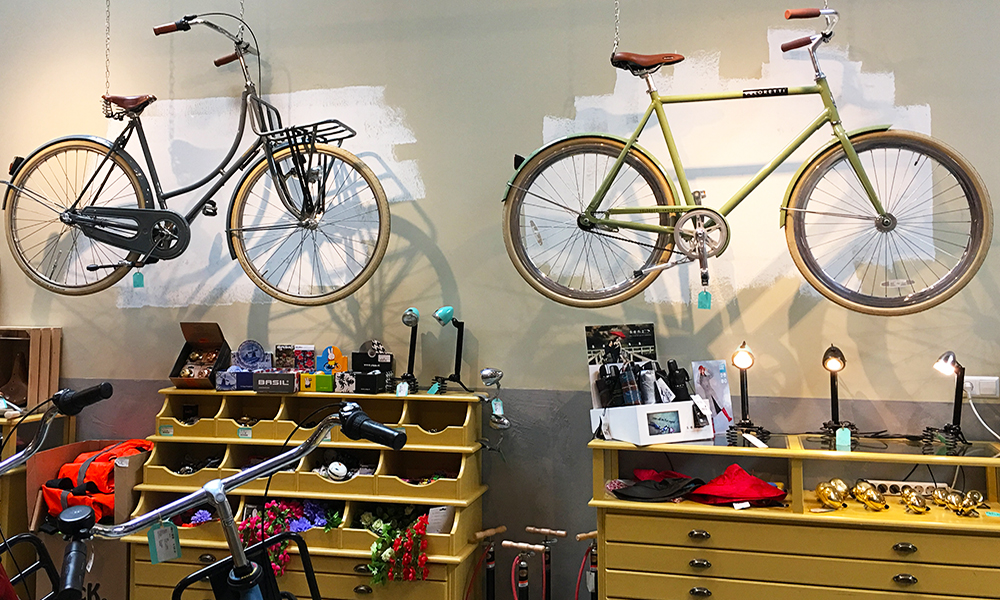 An improved cycling infrastructure together with efficient urban planning also favor this transport system: there is a vast network of over 35,000 kilometers of cycle lanes in Holland. By the way: although in many cities the cycle paths are segregated from motorised traffic it's not rare to find smaller towns where space is scant, therefore obliging cars and bikes to share. In those places, don't get surprised if you see signs accompanied by the words "Bike Street: Cars are guests". Isn't it ingenious?!

At the same time, no Dutch city is big enough to make distances impossible to handle. Naturally, the country's capital and the port city of Rotterdam have considerable proportions when it comes to cross through them by bike. However, this is not unfeasible and people do it all the same. Anyways, when you pass by Rotterdam, try to find yourself some time - and energy - to bike across the Erasmus bridge: you won't regret it! As for cycling in Amsterdam, this is not only an invitation to marvel at the dazzling landscapes - especially the scenic canals - but it is also easy and enjoyable because surfaces are flat and linear (Amsterdam bike lanes are probably the best in the world).

Another fact that proves the dominance of cyclists is the sheer amount of bicycles in the country: 23 million shared between over 17 million residents. There's more: electric versions are booming. This probably has some relation to the continuing flow of imiggrating expats who perhaps are not used to, or just prefer, a "no-sweat experience". I also believe eletric bikes have been in high demand because of their huge usage by food delivery companies, through varios Apps, during the fateful year of 2020.

Being myself an old-school person in so many ways, I rather stay with my conventional bicycle which has become such a dear partner to me that I cannot imagine life without it. I use it everyday, from daily routines such as going to the farmers' market on Saturdays or strolling around on weekends, to visiting museums in town or reaching out to my favorite hotspots such as De Hallen.

Cycling in the Netherlands is very much an intrinsic part of Dutch DNA. Even before they can walk, Dutch children are integrated into the universe of cycling. Especially in Amsterdam: babies, for instance, travel in special seats called "bakfiets" (equivalent to a cargo bike) which are safe and usually equipped with a canopy.

As they get a bit older, the back or the front seat of their parents's bikes are the perfect spot to travel along while they can learn the "do's and dont's" by paying attention to the experts. By this time, kids become familiar with that frozen feeling of getting direct wind on their faces! As strange as this might sound, it instills them the ability to cope with very low temperatures for the rest of their lives! Let's face it: this is of utmost importance as the Netherlands is not the sun's best friend!

As soon as they grow up, about 10 to 12 years old, boys and girls are encouraged to try out a little bit of autonomy using the pedals by themselves to run short distances (home to school, for example). This custom will accompany them forever, making the Dutch and their bicyles lifelong companions. 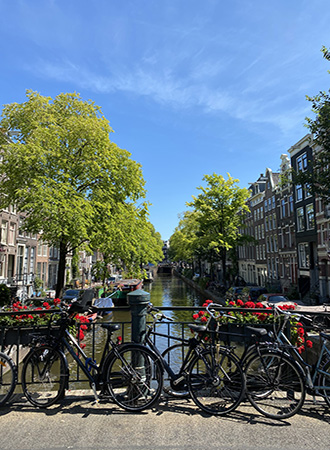 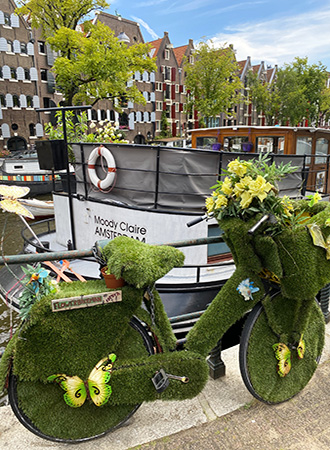 To many a Dutchman, riding a bicycle is by no means a hobby and even less, something that they do occasionally. There is good reason why they can sometimes ride fast and furious like there's no time to lose. Often they use pedal-back brakes and always overtake the slow-movers - in a polite way, I would say. Given Amsterdam's popularity with tourists (not exactly in 2020, sadly), Dutch cyclists should be patient and tolerant towards the novices (even if that is not always the case).

The Dutch have also learnt a great ability to do everything at once: riding a bike while they carry the umbrella, the groceries, the flower bouquet, the children and much more. Except the cell phone: since July 2019, the Dutch governement has forbidden the use of mobiles or any other device while cycling to help prevent accidents. Hardly anyone dares to disobey the rules because if one does, a fine of €95 must be paid!

There are bikes to cater for all tastes and budgets. As the Dutch are open-minded to clothing, furniture and all sorts of second hand items, it's easy-peasy to find very good deals (especially amongst Facebook groups).

I've been told that it's not rare to see those who have two sorts of bikes: the more elegant or sporty one for weekends and special occasions that are kept safe at home, while the other old shabby one is left on the street. You may even think that leaving one's bike on the street looks like a careless move..., I, on the other hand, perceive it as a pragmatic move: we can't run away from the constant windy and rainy weather that aggravates the "aging process" of bicycles, so let's just surrender to chance!

A second misfortune of making your two-wheel companion suffer in the cold outside is to face unpleasant thefts that can certainly happen even in a first world country such as Holland which is probably the most tolerant nation of all (in 2019, the Dutch authorities recorded around 466,000 bike thefts - 200,000 less than the year before!).

Little tip: if you are hanging out, enjoying a wonderful vacation in Holland and don't want to feel like an outsider, there are hundreds of shops specialized in bike rental in Amsterdam. It costs from €10 to €15 a day, (prices can go down if the rental period is extended). I recommend the Black Bikes' rental store. And don't forget to check if the back and front lights are working (you cannot drive without them at night; if you do, prepare to pay a fine of €60).

It's likely common sense that Amsterdam is one of the world's most authentic cities in part because of its permissive approach towards cannabis use. However, despite all efforts to advertise uncountable wonderful qualities the Dutch nation has to offer, the Netherlands is far from being the country where people smoke weed the most.

Funny to think that in today's world where so many changes in publishing happen - and not necessarily profitable or positive -, Leipzig still sustains a very strong business selling books, magazines, newspapers and other print journals. I emphasize: printed.