It's likely common sense that Amsterdam is one of the world's most authentic cities in part because of its permissive approach towards cannabis use not to mention the infamous Red Light District. Let's face it: if it wasn't for these peculiarities, who knows in which terms this gorgeous town would be able to uphold its massive touristic flow. However, despite all efforts to advertise uncountable wonderful qualities this nation has to offer (I include myself as a loyal ambassador to this end), the Netherlands is far from being the country where people smoke weed the most. 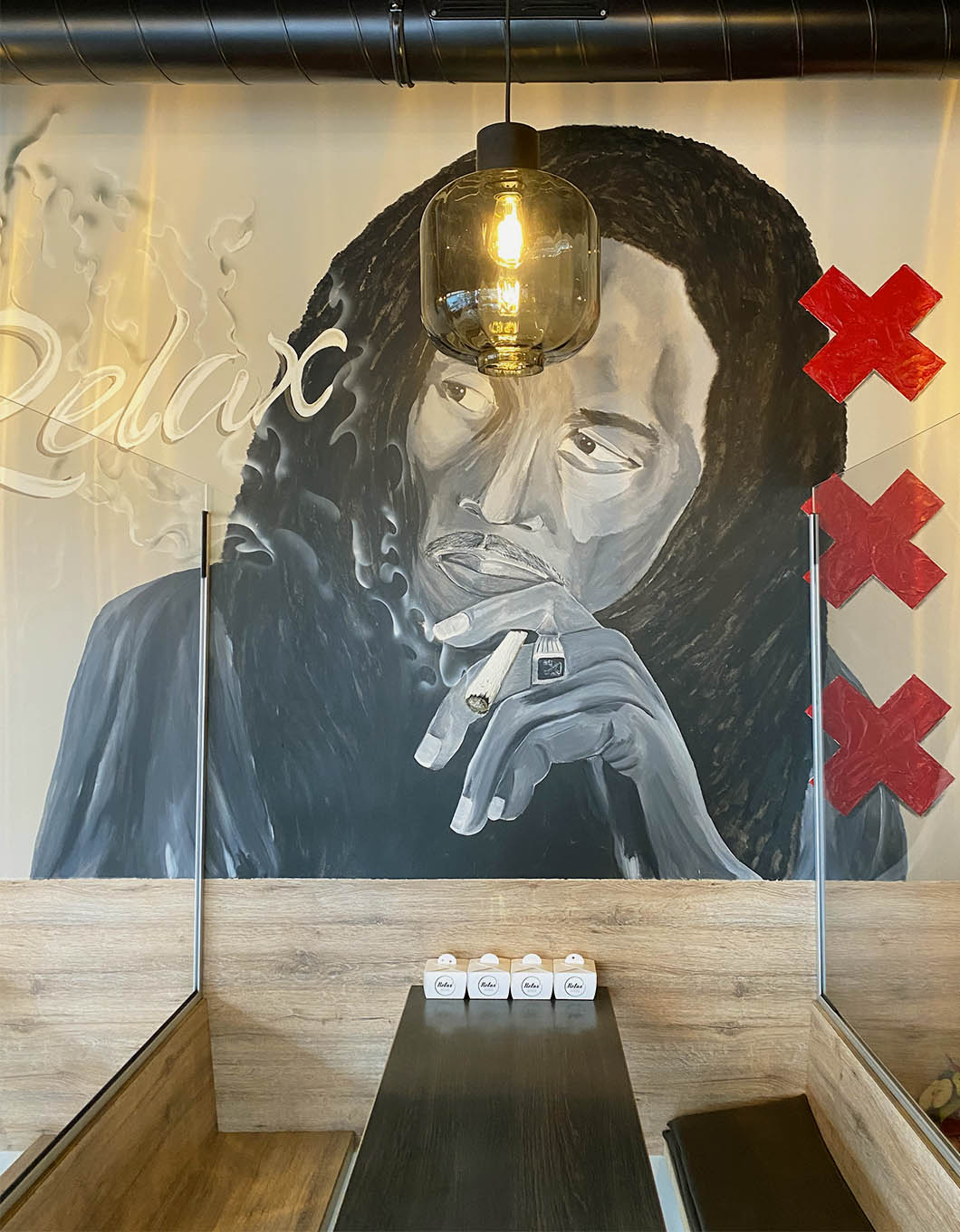 In fact, the latest report of the United Nations Office on Drugs and Crime (UNODC) brings to attention North America, Australia, New Zealand and West and Central Africa as the regions with the highest annual prevalence of cannabis use. You may also be surprised to hear that Israel and Iceland, king-sized weed sympathizers, scored within the top five ones in past years. Still, the Netherlands, especially Amsterdam, pays the price entailed by a misconception about its reputation.

More intriguing is to become aware that it is illegal to produce and supply weed on Dutch soil. Oddly enough, you might wonder: how come the 500 coffeeshops spread throughout the country are allowed to sell hemp for personal consumption (recreational drug)? The answer is confusing and contradictory though it lies at the very essence of the true Dutch pragmatic behavior. 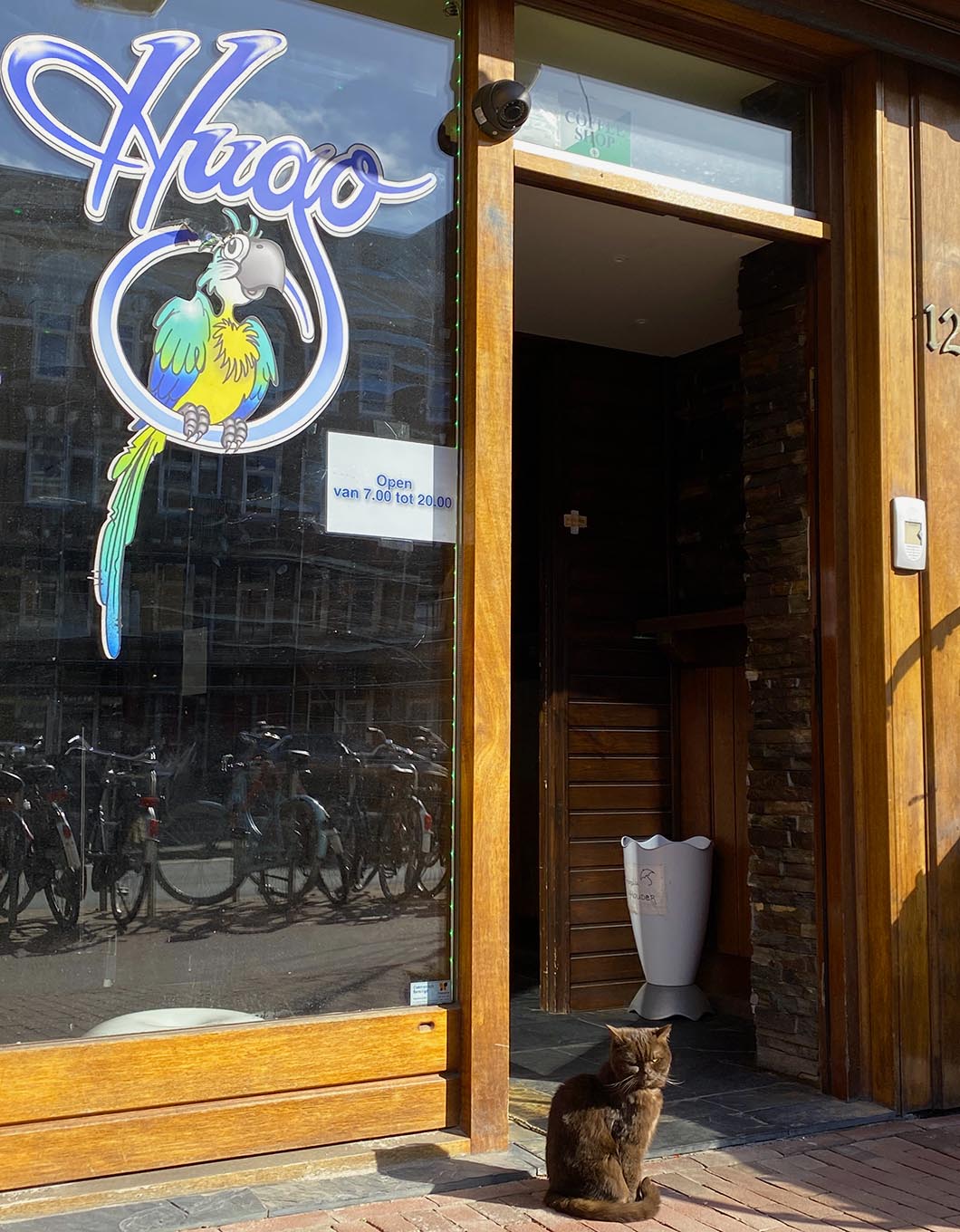 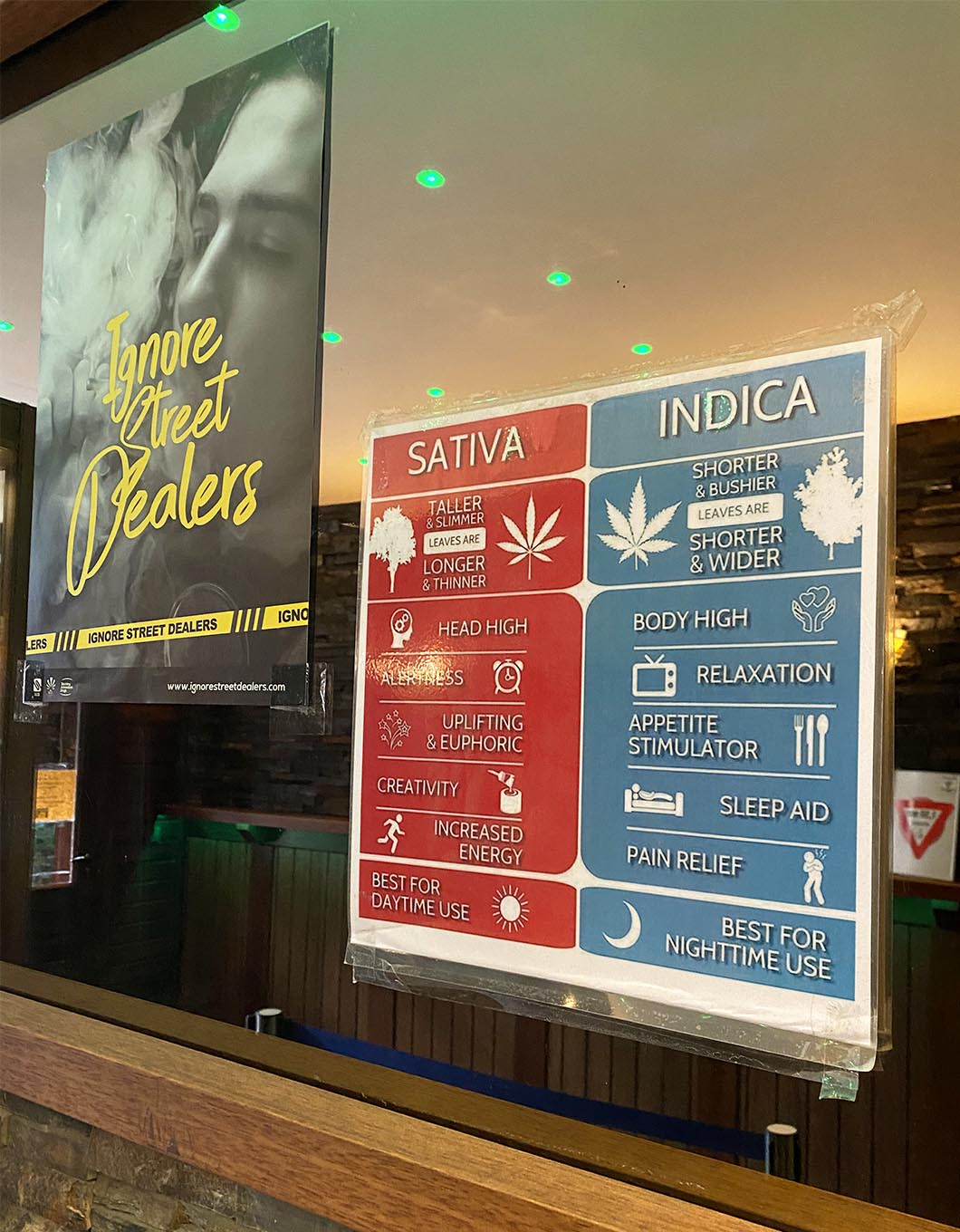 Isn't cannabis legalized in the Netherlands?

It's not. Bottom line is, coffeeshops are granted permits to trade by the authorities who will turn a "blind eye" to those in possession of 5 grams or less. The Dutch policy of toleration - not to be mistaken with legalization - states on the Government's website: "Soft drugs are less damaging to health than hard drugs. In the Netherlands, coffeeshops are permitted to sell cannabis under strict conditions".

It's been this way since the 1970's when decriminalization came into effect. In other words, Dutch pragmatism would rather keep the cannabis business under control, by regulating and taxing it, instead of prohibiting it thereby encouraging a market for criminals.

Once people are free to consume a small amount of weed from licensed shops, the chances are that they will not be in contact with heavier drugs such as cocaine and heroin, as the Government explains: "Separating soft and hard drugs shields the users of soft drugs from the criminal circuit that is involved in the hard drugs trade". 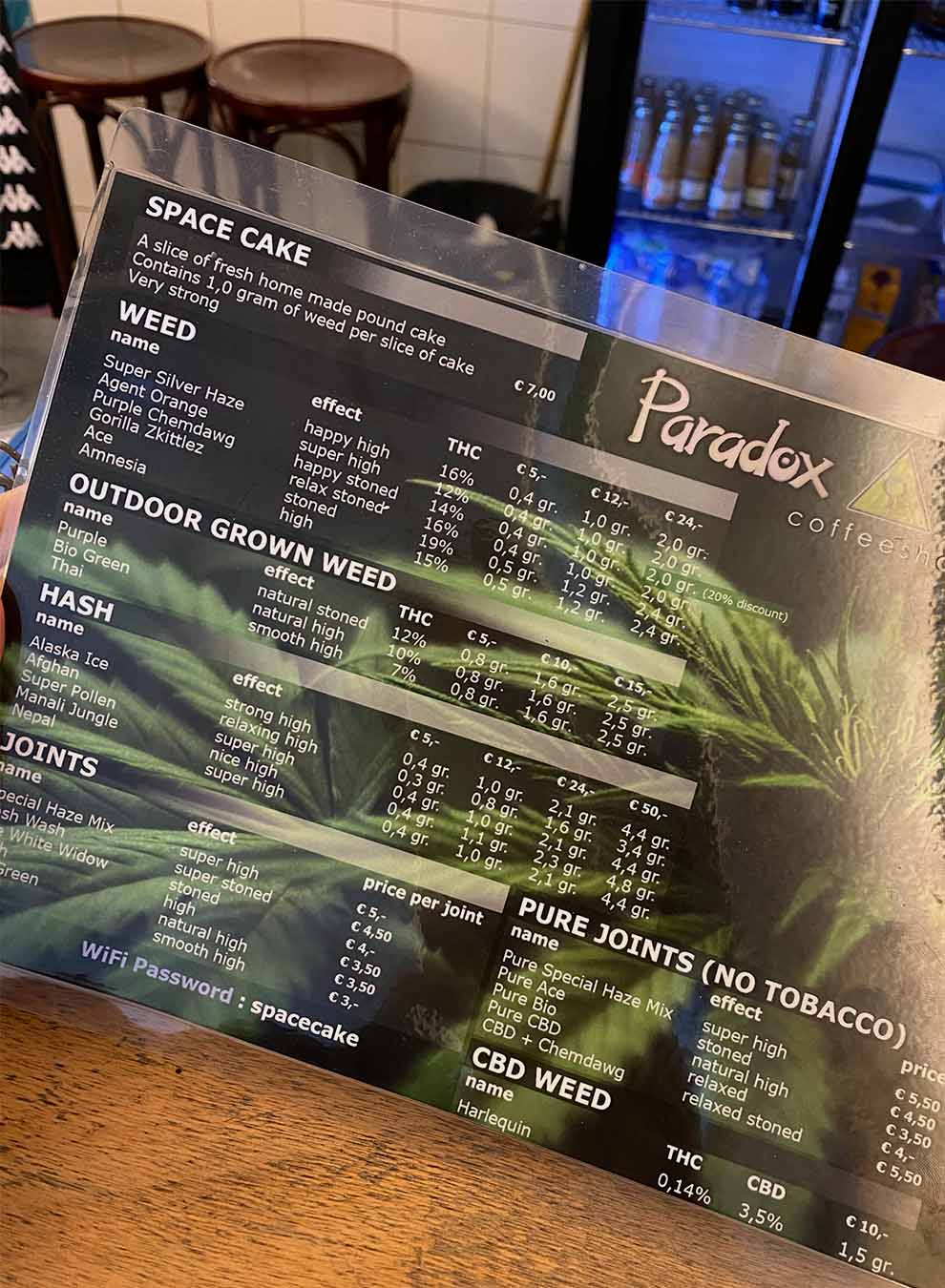 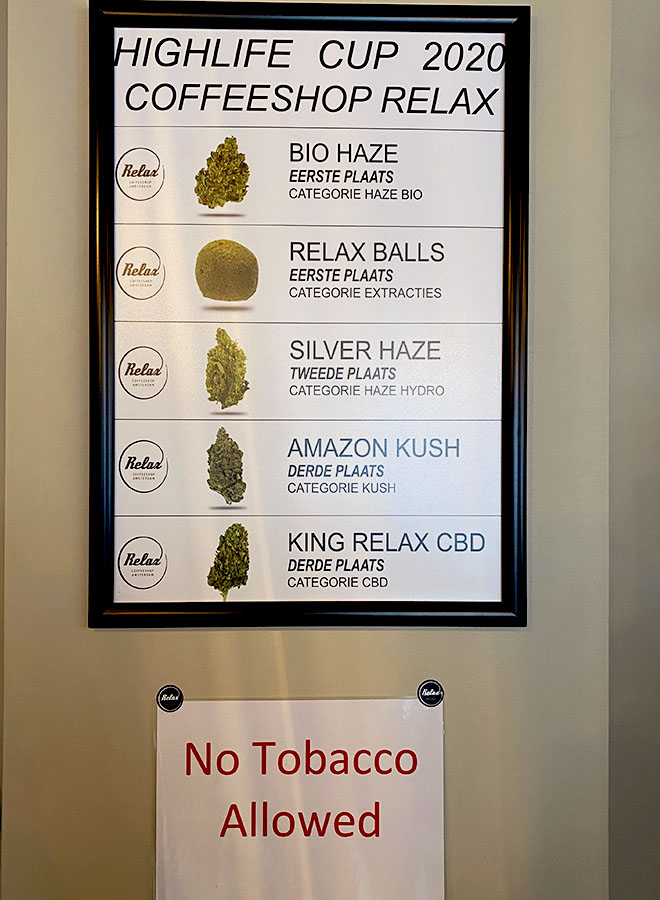 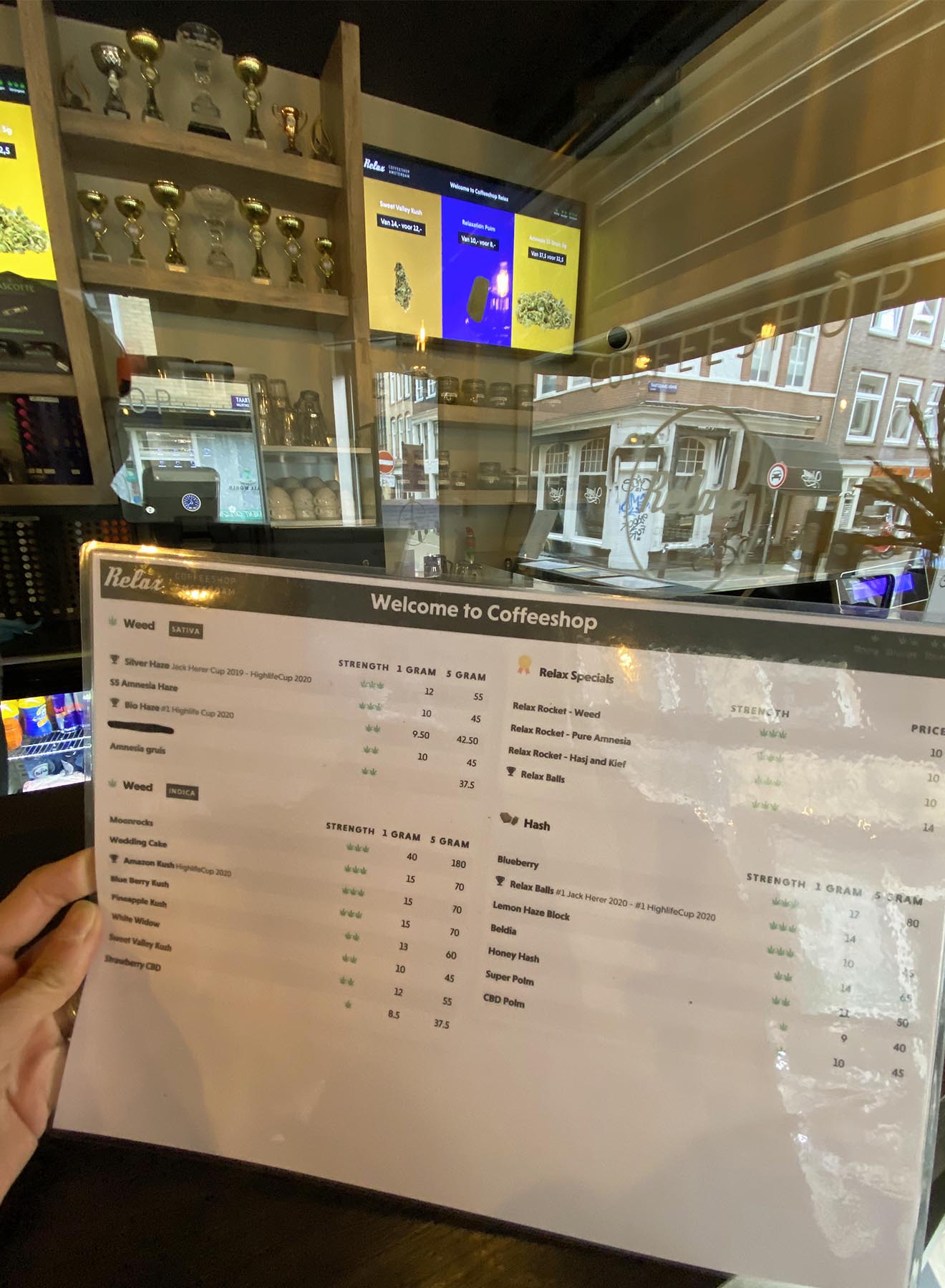 It's undeniable that this ocean of liberalism sparkles the world's eyes: regardless of the purpose of the visit, be it for business or pleasure, it is suggested that 25-30 per cent of travelers spend time in coffeeshops. On the other hand, it seems that only 8% of Dutch people smoke marijuana and many do it occasionally (in practical terms, to grow up in a society where smoking pot is not a taboo - even less so prohibited - makes it become ordinary and less desirable). Which triggers the fact on how dependent most coffeeshops are upon tourism and likewise expats.

After having spoken with a couple of managers of smoking houses established for decades in Amsterdam, my suspicions were finally proved: only the places outside the city center cannot complain about the absence of tourists since 2020. Depressingly, all the ones located in cool, central neighborhoods are literally fighting to survive, thankfully backed by a few local partisans.

Then I was left with a question: if the ban on touristic access to coffeeshops becomes an effective measure - following the city's goal to banish visitors who focus on getting stoned or drunk and causing a nuisance only - how many of the current coffeeshops will survive? And how will Amsterdam's popularity be perceived in the early future? I hope to be around to witness any of these possible changes. Meanwhile, I leave you with a small, harmless dose of knowledge:

Curiosities about the cannabis world

*Some coffeeshops in Amsterdam have dear mascots such as cats, dogs and parrots;

*Cannabis is used for medicinal purposes, such as pain, spasms, muscle cramps, MS, cancer and AIDS;

*Ancient China is probably where cannabis consumption made its first appearance (5,000 years ago);

*The oldest coffeeshop in Amsterdam, Mellow Yellow, opened in 1972 but was forced to close in 2017 because of a then new regulation that coffeeshops had to be located at least 250 meters from schools;

*Instagram: most coffeeshops have their own social media account which is used as a means to make themselves popular. However, prices cannot be posted as this would be classed as advertising and, according to the "ambiguous" Dutch toleration policy, to advertise is not permitted. 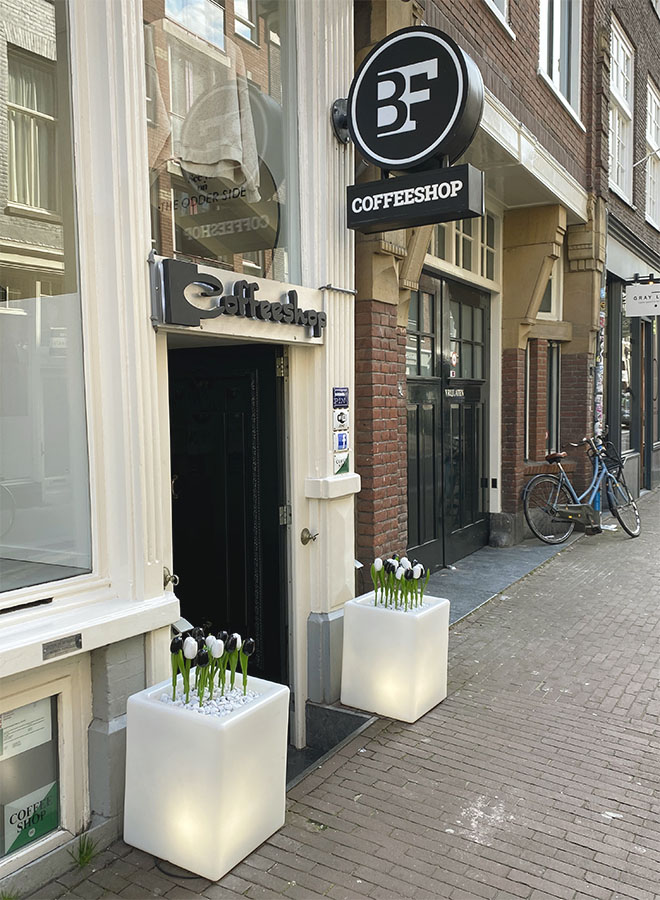 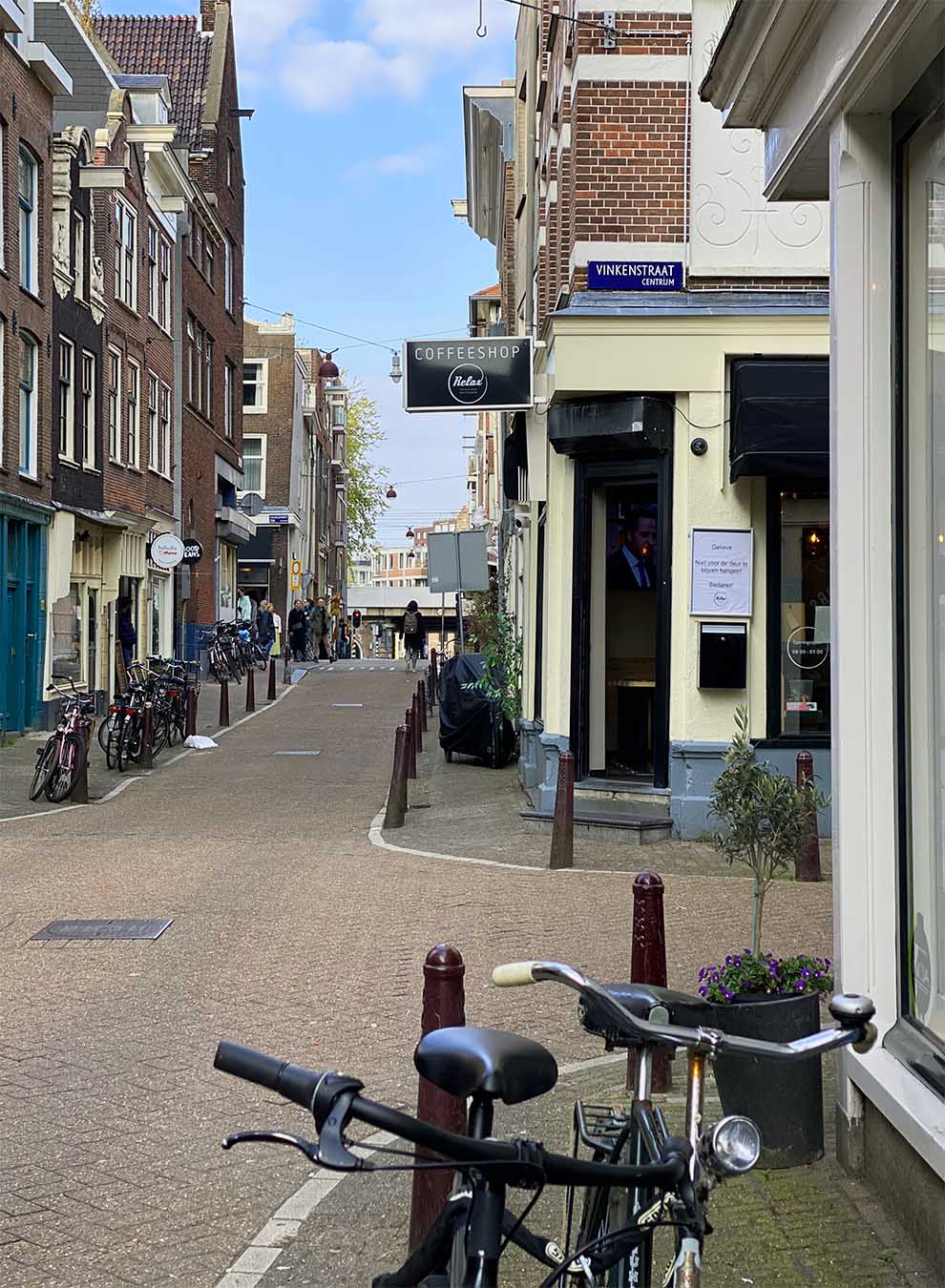 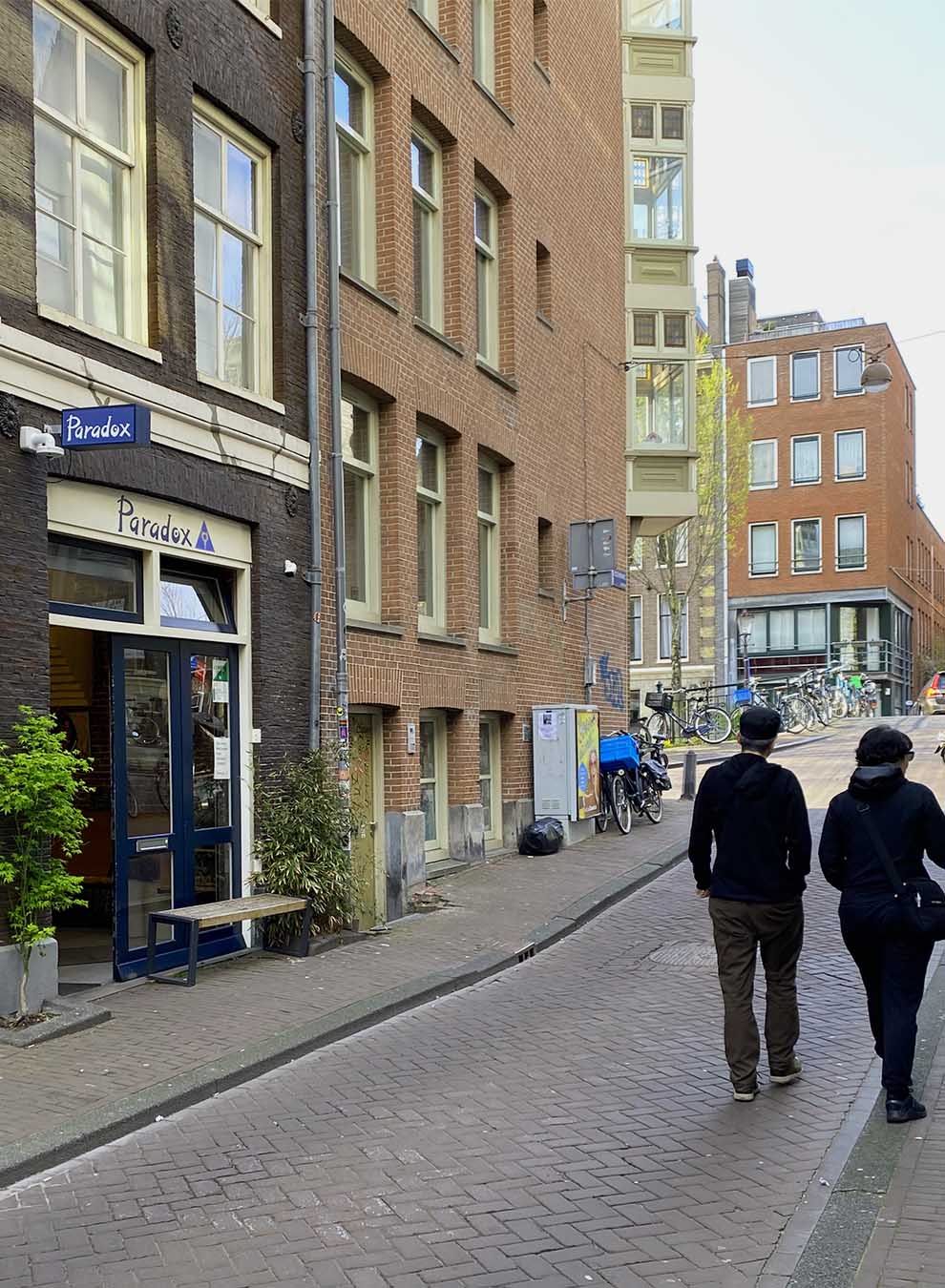 Before visiting a coffeeshop in Amsterdam

*Jargons: visitors can purchase pure weed (dried, unprocessed flowers of the female cannabis plant), weed mixed with tobacco, hashish (resin of the female cannabis plant that's been separated from the plant itself via mechanical or chemical means), spacecake (a form of edible cannabis such as a brownie, cookie, candy or piece of cake) and CBD weed (short for cannabidiol, a natural compound that delivers mental/physical effects without the giggles, paranoia or the strong sedation known as couch-lock);

*Prices: these generally vary between €5 and €24 for weed whereas they can go up to €50 for 4,4 g of hash from Nepal or Afghanistan;

*Novices: Do not fear. They sell pre-rolled joints in addition to there being trained vendors who can advise on which hemp is best reflected for each mood, occasion or profile;

*Rules: a grown-up person can only buy 5 grams of weed a day for personal use (it is forbidden to sell to the underaged); alcohol is never permitted within the coffeeshop's premises, although smokers can buy soft drinks, hot beverages and snacks;

*Where to smoke: it's forbidden to make use of cannabis in public; for that, coffeeshops are equipped with lounge areas, where in some cases you can watch TV, listen to music or play pool - or simply consume it in private at home;

@coffeshop_hugo: a sweet welcome is certainly guaranteed to whoever comes inside, not only by the owners but also by their two little pets - the macaw, Hugo, and the cat, Stoney. Plus: you'll never get upset by wasted, annoying backpackers as the shop is outside the city center but still close to many of the best places to visit in Amsterdam.

@paradox.coffeeshop: clients can often see on-site exhibitions thanks to works displayed over the walls from less-known artists who can show their creations for free (such a cool idea!). Plus, with more than three decades to their name, they have secured the reputation for the most coveted homemade spacecake in the city.

@coffeeshoprelax: given the several trophies showcased in the shop, one notices how proud and active they are when it comes to cannabis cups. Apart from that, TV and music serve as good entertainment in addition to its location being right across Small World, one of the best delis in town (don't miss the chance to try the best carrot cake of your life).

@bestfriendamsterdam: friendly, well trained staff and a cozy, stylish vibe make this an excellent choice, equally for newcomers, who can feel comfortable to "joint" the Mary Jane world for the first time. 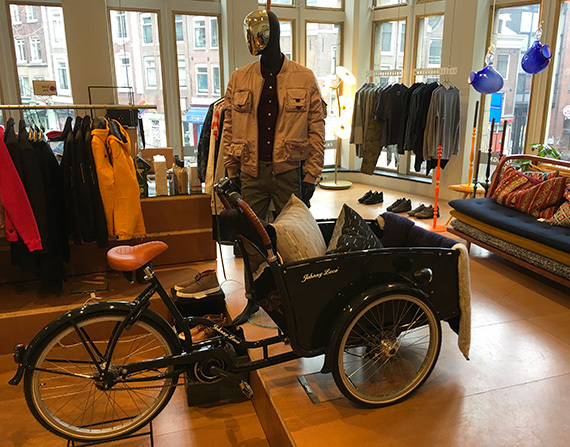 Even if you don't live in the Netherlands, it won't take long until you notice, when you visit the country, that the main vehicle used by its citizens is something much more than just a means of transport to go from A to B: it's a lifestyle, something so personal that ends up becoming a companion for life. It's part of what being Dutch means.

Funny to think that in today's world where so many changes in publishing happen - and not necessarily profitable or positive -, Leipzig still sustains a very strong business selling books, magazines, newspapers and other print journals. I emphasize: printed.