A few hours after my arrival in Salzburg I knew this city would be completely mind-blowing. Right before saying goodbye I felt a mixture of joy and sadness. I have always thought about Vienna whenever Austria comes to mind. After all, it's the country's capital and the birthplace of the Austro-Hungarian Empire. This can certainly explain its magnitude and significance. 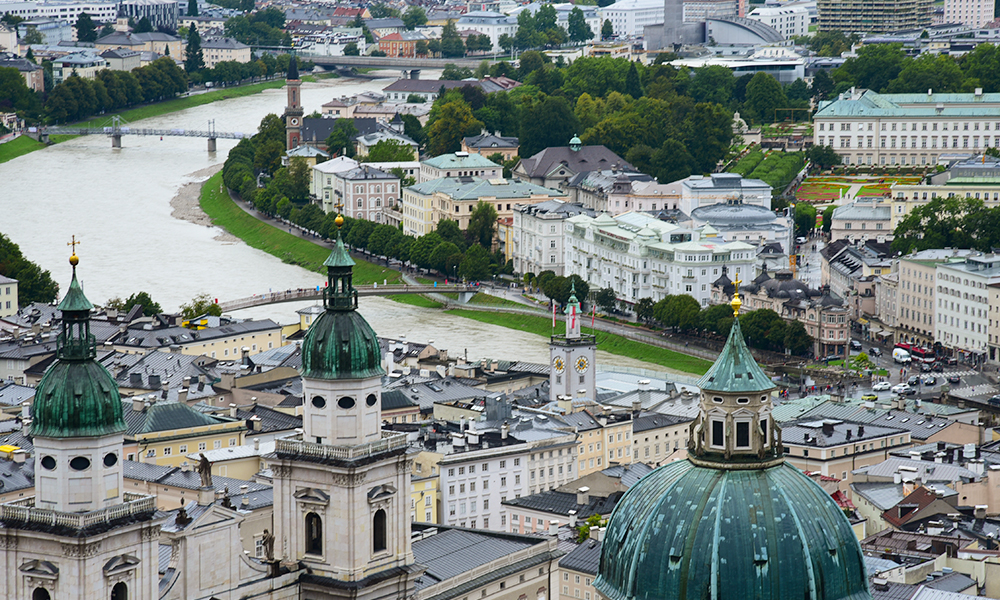 Salzburg, on the other hand, I would define as a laid-back version of Vienna. Its opulence and glory doesn't hit you in the face, but it does, however, have a sophisticated and low-profile atmosphere hand in hand with a swanky vibe. Strolling around the UNESCO listed Old City Centre "Altstadt" makes me feel like I’m in a fairy tale, I must confess. Everything seems to be in the right place: gorgeous and preserved medieval galleries, passageways and businesses which keep ancient traditions alive and fashion-oriented stores with elegant windows. I could almost spend my whole life walking through the romantic narrow streets that lead to squares surrounded by Baroque and Italian Renaissance architecture. 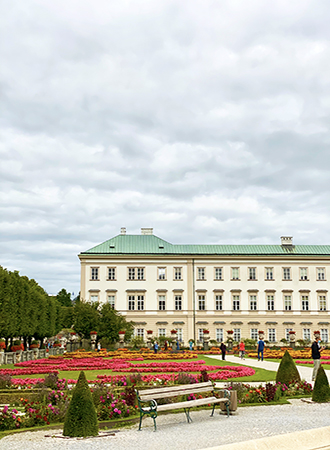 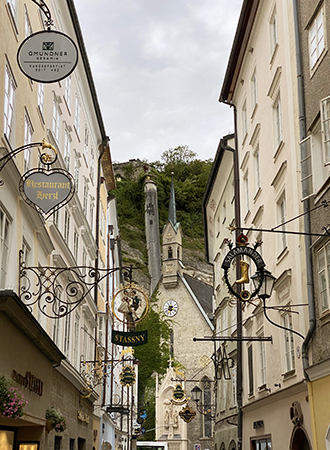 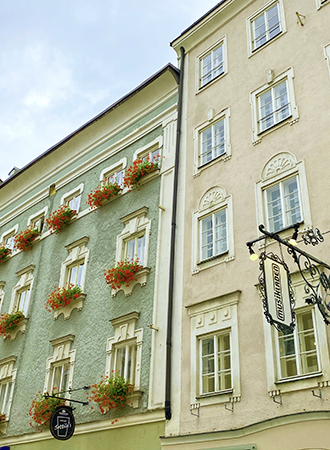 The view of my hotel room was exactly what I needed to get inspired and rested. I would sit, every morning and night, with a glass of coffee or tea, by the window of Hotel Stein. There's no better place than this spot to stare at the Salzach River while looking up at the Hohensalzburg Fortress, high above the towers of the city. Contemplating this spectacular landscape also made me realise how Salzburg is luckily positioned in the middle of five hills. Centuries ago it granted dwellers strategic protection from invaders. Whereas now they can represent an escape to nature, if only people are willing to leave this magnetic city... 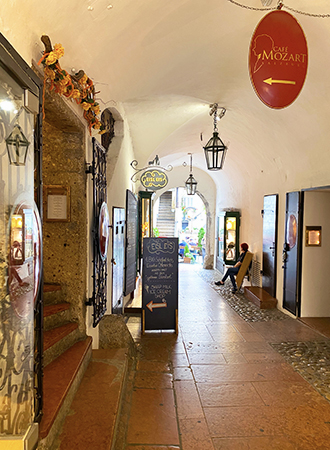 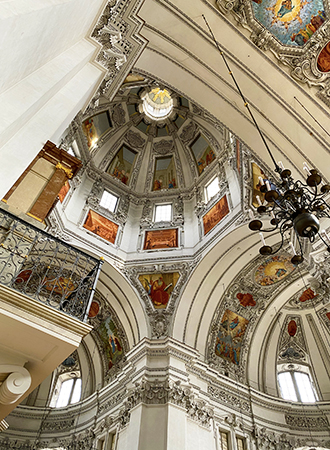 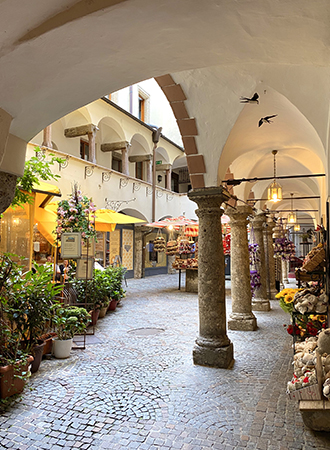 When I fall in love with a city, I tend to like it even more at nighttime. Especially the old ones. There's always a certain mystery that captivates me. A tranquility also hovers over churches and monuments (and Salzburg has many of them!). Exploring Salzburg at night sounds like a velvety sonata. I wonder how much Mozart drew inspiration from his gorgeous hometown... the musical heritage throughout the entire city is something impossible to be oblivious to. 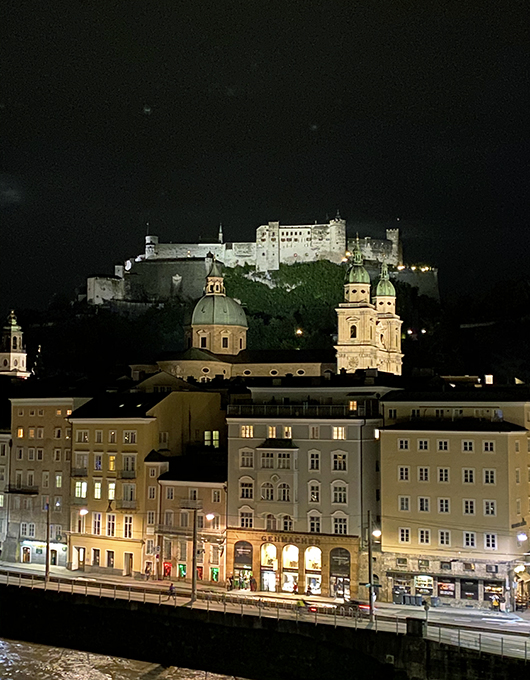 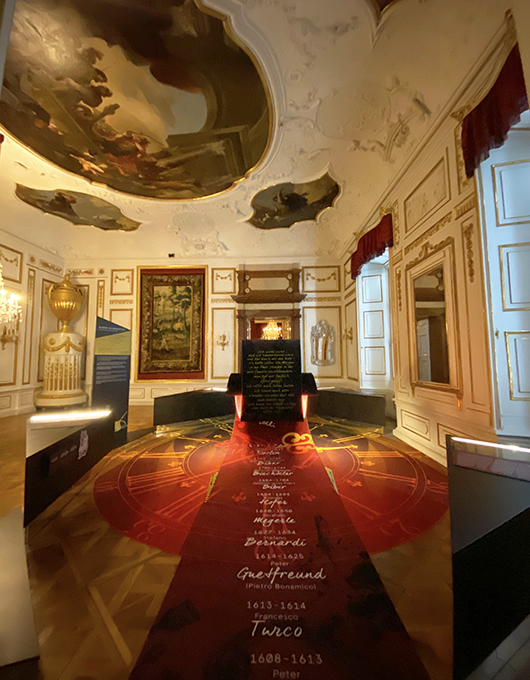 Salzburg can be one of the most inspiring cities in Austria thanks to its rich history and culture as well as its timeless charm. The former prince-archbishops enhanced this town's magnificence by commissioning and renovating its urban planning. And this won't ever be forgotten by its people. Salzburg is a place that emanates culture and music and welcomes approximately eight million visitors each year. I visited it during the end of the Summer, and I was told this was the best time to be there. This could perhaps be true, however, I’m looking forward to returning at Christmas. 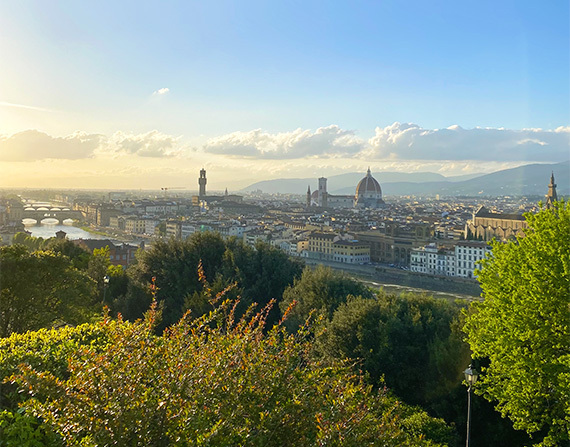