The unconventional lifestyle of houseboat owners

"Look at that tree: right now we have a duck's nest there", says Rianne Blaakmeer, she points out as we speak on the deck of her boat by the Amstel River. The sunny spring afternoon highlighted the enthusiasm in her smile even more as well as the confidence of someone who appreciates her own lifestyle's choice very much. She continues: "There's also a goose who comes by from time to time; he even built his nest by the side of our boat and after a while he was swimming along with his goslings. This was so unique to see! It's also one of the reasons that made us to decide to live in this place and take advantage of being closer to nature and freedom".

The sense of liberty that Rianne, a friendly Dutch lady and co-founder of Uitgeverij Pluim's publishing house, so longed for would be achieved when she and her husband could look day and night at a faraway horizon, and "not only at the balcony of the neighbours", as she describes it. It took a lot of determination to deal with expectations, frustrations and the glory of seeing her own boat brand new after six months of intensive renovations (and by the way the boat was abruptly burnt down during the restoration!). This same boat had to travel a distance of 150km from Leeuwarden, in the North of the Netherlands, until it reached its final destination in Amsterdam.

Just like Rianne, many boat buyers travel to distant regions in search of good deals, which could also include having to cross the border with Germany and personally check the options advertised on real estate websites. On the other hand, one has to bear in mind that just buying the boat can be pointless: each owner must own a "piece of land-water" to guarantee his fixed address. 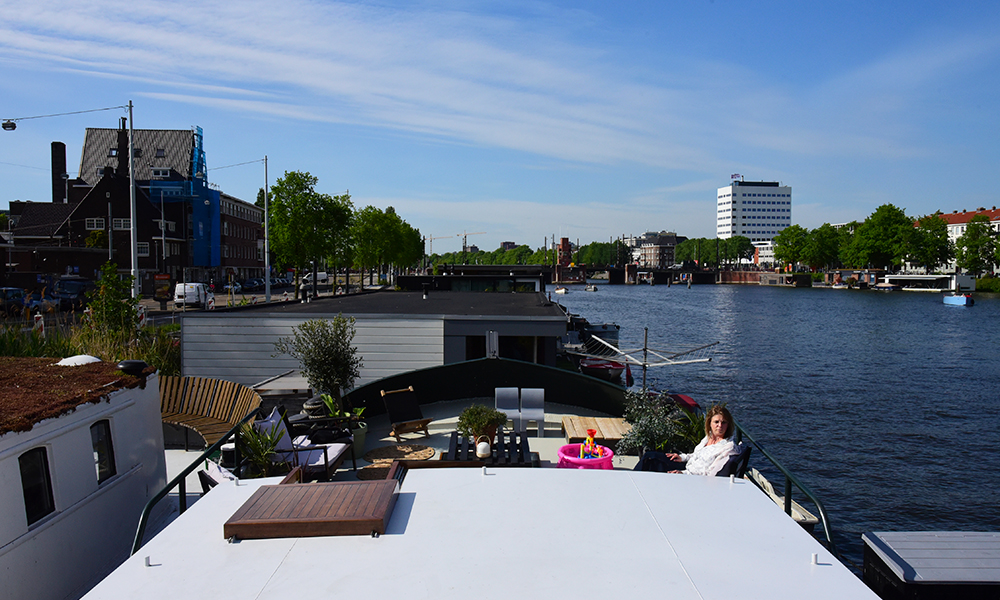 There are currently 2,500 registered houseboats in Amsterdam, a considerable number for the city's river network (which has around 100km of canals). Buying a ship does not mean, in turn, that you will be able to use it as a dwelling. It is mandatory to buy a permit called a ligplaats. "Not everyone dares to face the purchase of a houseboat and gain permission that is time-consuming, risky, stressful and may not even work. It requires courage and the ability to cope",says Rianne, who, along with her husband, has faced an intense process of waiting and refurbishing. Not to mention the investment of approximately 300,000 Euros until she could enjoy a house as beautiful as new, renovated in a structure more than a century old: boat houses over 100 years old are quite common by the way.

For some, this is the beauty of living in one of them, just as it is for Jasper Helmer, one of the owners of the Noorderlicht Café (an authentic cultural and gastronomic place), who maintains a deep and connected relationship with his boat, on which he has been living for 10 years. "It may sound a little bit strange, but when I think about my boat it feels like a friend; I really love the ship in that sense and I am really thankful that it became part of my life; it's an entity to me".

At least until September 2020 Jasper will miss his companion, temporarily rented to a doctor who works on the front line of Covid-19, while he camps with his family and preserves his connection with nature: one of the foundations of a conscious and healthy lifestyle, according to him.

Jasper is not the only one to personify his boat and highlight the importance of its history, since most of the houseboats in Amsterdam have many decades of life: former cargo ships were the main vehicle of goods and merchandise transport.This same ship could also serve, for certain families, as a humble space to live in. There was no glamour, may I say, as it was all very simple and rustic, even to get electricity and hot water. 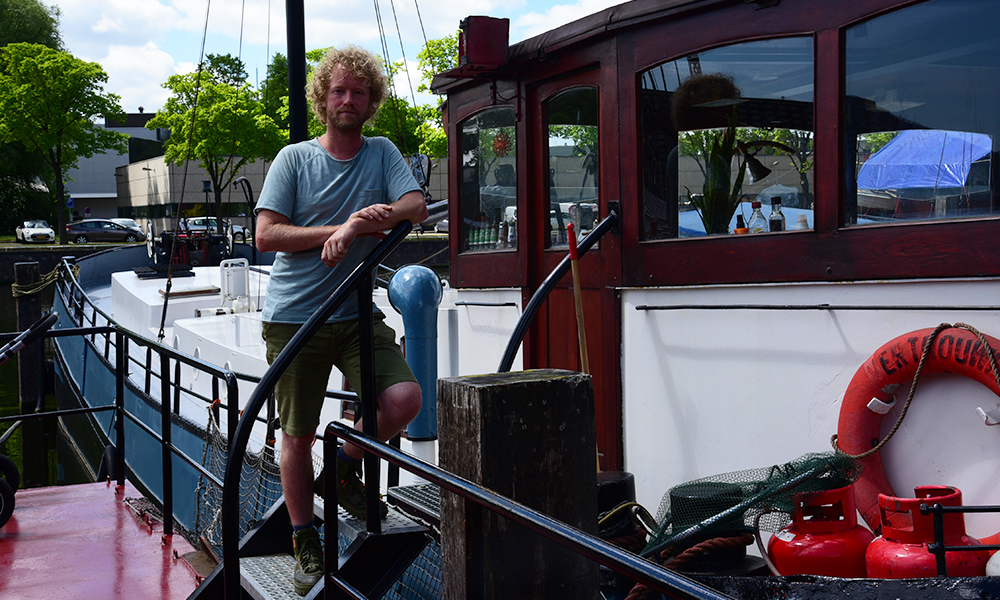 Only after speaking with some boat owners did I really come to acknowledge a subtle motive within the group of boat owners. When many of us rent or buy a house, this has nothing to do with the purpose of those who choose to dedicate their lives to reside in an unconventional environment. "Sometimes I hate her but I love her dearly. She's part of the family like an old grumpy lady who decides if we can live with her, maybe, if we behave!", says Saskia Legein, Head of Communications of De Balie (National Institute for Debates Arts Culture and Talent) about her relationship with the boat (it is a "she" boat, by the way). It was somehow from this phrase that we began our delightful conversation on her boat - which has also completed its centenary - where she lives with her husband and 10-year-old son, in a privileged central location, still in an extremely quiet canal. "You get married to your ship, it's a marriage and it's hard work too, so keep it positive", she adds, wisely.

Nobody chooses to live on a boat by chance. It's not a random choice of housing. No. You really need to want to marry your boat. Certainly, many see it as a more attractive option when considering the challenge of finding a well located and maintained - or new - property in central areas in Amsterdam. This, instead, may not be so much accessible in terms of rental. Cavan Sheahan, from HousingNet real estate agency (specialised in expatriates), explains to me that monthly boat rentals can cost 25% more than a standard property (€23.50 to €25 sqm, while houseboats can cost up to €30 sqm). "This, of course, depends on location, finishes and what the house has to offer", notes Cavan. 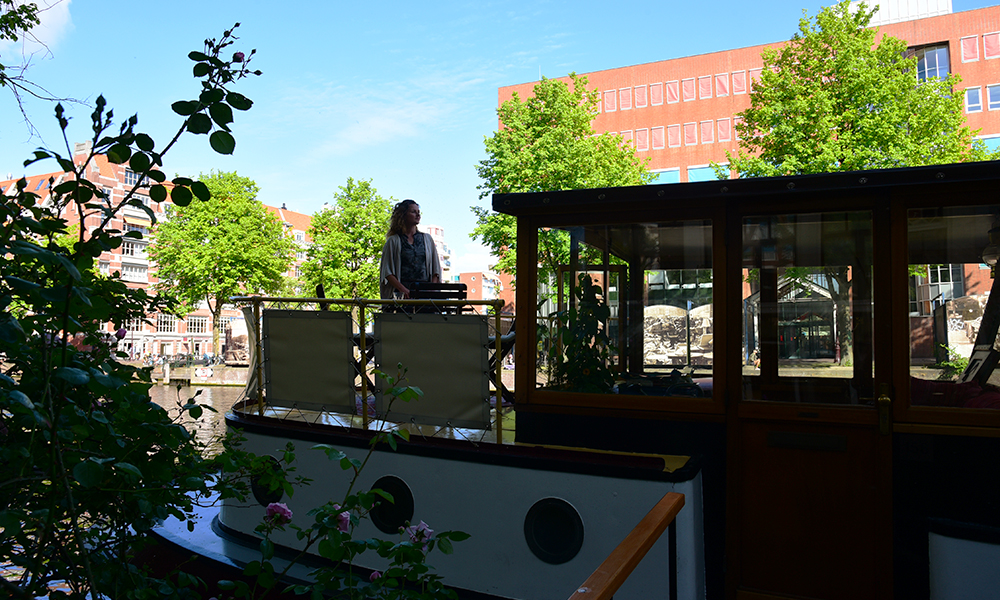 "If you want to live on a boat, that says something about you", Jasper believes, referring to a very peculiar profile of people, whose interests and thoughts flow, he says, outside the so-called "massa" of the population. "If you don't like living on a boat, you will run away after a few months. In the winter it is colder; in the summer it is hotter; if it rains it is wetter; if there is a storm, the boat bumps. It is not so comfortable". I heard something similar from the young actor Tarik Moree, who's only 24 years old and already owns his houseboat: "The winter was a testing period for myself. If I survived the winter and still liked this boat, then I would be able to continue living here". Tarik confesses that sailing has been in his blood since he was a little boy - family influence - but being such a sociable person and "a bit addicted to people and hating to be alone" as Tarik describes himself, made him overcome the down sides and the feeling of loneliness, especially during the harsh Dutch winter. The actor succeeded in his own challenge and has been living for more than one year on his ship - in a very simple and modest way: when I say modest, it means that washing clothing and taking showers are done outside the house, i.e. in the marina's office. "But I have a toilet on board which is great. I do have everything I need here, it's small, but enough for one person".

If a house on the land already demands care and repairs, imagine a boat that naturally suffers from wear given its geographical position. By maintenance means taking it every five years to a shipyard where they remove all the excess water that accumulates inside over the years - it costs a lot for that too. It also requires checking centimeter by centimeter to ensure that there are no rust and hollow parts damaged by the water. Not to mention possible leaks, re-paintings and so on. This becomes, in fact, the least of the problems for some, while for others, raising a child inside a boat can sound dangerous and reckless. Rianne Blaakmeer confessed that she was heavily criticized for it; but she was not shaken by any disapproval and exalted, said: "In a few years my son will have his own private pool. That's fantastic, don't you think?". 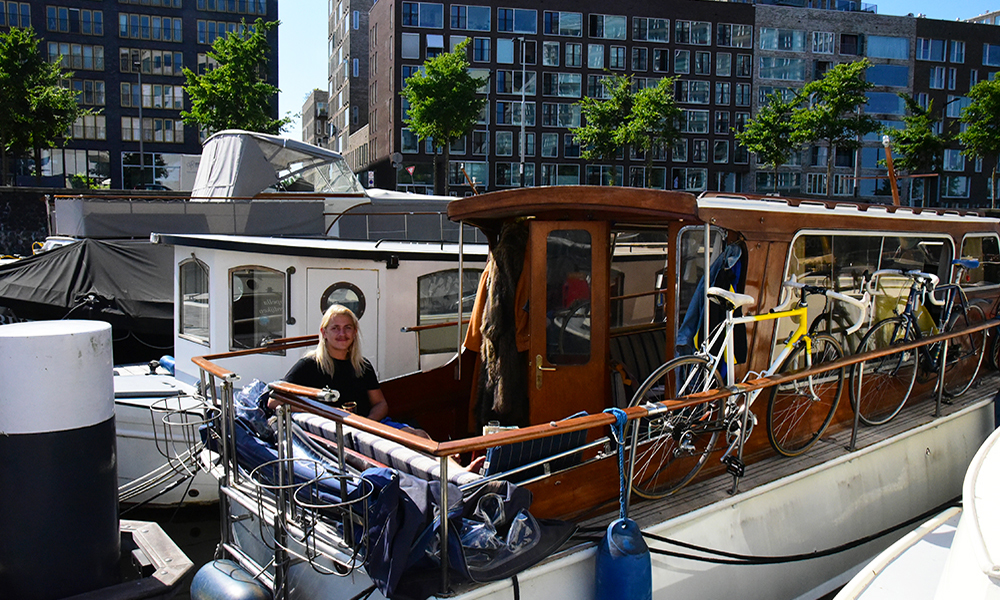 There are also those who point out that getting older may not be easy to live with narrow stairs and slippery floors. Everyone assures me, however, even facing these peculiarities, that the advantages are greater when compared to a house on the land. "The nicest part about it is that every time when I come home, I take a look at the water and it feels like a constant holiday", says Saskia, as she admires her surroundings and doesn't blink to reassure that any hard work maintenance becomes rewarded. I tend to agree with her. Who knows, in the future, I might even venture myself into this eccentric and curious lifestyle as well. 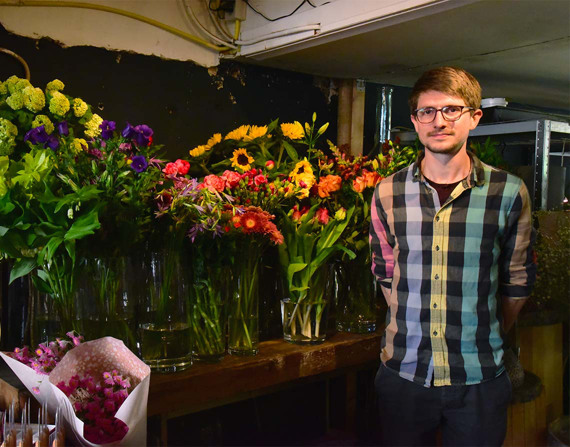 The huge amount of flower shops in Amsterdam epitomises not only the life-time relationship between the Netherlands and flora but also how keen Dutch people are to nurture a close relationship with the greens. But one shop, in my opinion, certainly stands out the most: Mooi Anders, an urban jungle that caught my attention since the very first time I passed by its doors. 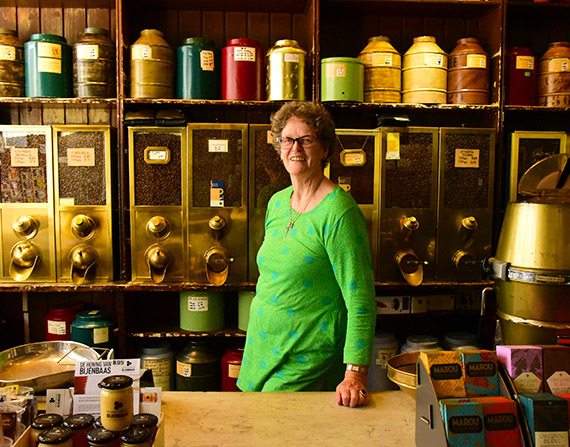